As part of National Mentoring Month today is Thank Your Mentor Day.  To all those who take the time to mentor others we thank you for your hard work and dedication to improving others lives. 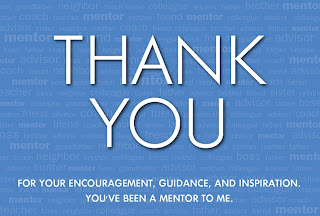 "I am only one, but still I am one. I cannot do everything, but still I can do something; and because I cannot do everything, I will not refuse to do something that I can do.”
~ Helen Keller - American author and educator who was blind and deaf. (1880-1968)
Check out the YouTube Mentoring Month Channel and see the special message from President Obama about mentoring.

If you have a mentor to thank, check out these easy steps provided by National Mentoring Month.

For those who are interested in volunteering there are opportunities to work with Children/Youth and opportunities to Mentor on the Volunteer Center website.  Don't miss your chance to make a difference in the life of someone in need.  Mentoring can be as significant as a 1-2 year long commitment or as convenient as reading to a child for 30 minutes once a week on your lunch break.  Check out all the available opportunities and see if there's something that works for you.
Posted by HandsOn Nevada at 2:17 PM No comments:

An 80% recycling rate.  Impossible!  80%?!  Of my weekly garbage, I don’t even know what is considered recyclable to attain such a rate.  But, the Zabbaleen do, and it’s represented in the documentary “Garbage Dreams”, the inaugural film offered through the Volunteer Center of Southern Nevada’s Community Cinema screenings.  The documentary, filmed in Cairo, tells the story of the Zabbaleen (translated to “garbage people” in Egyptian Arabic) who were responsible for garbage pickup in one of Egypt’s seemingly most beautiful cities.  The majority of their methods were antiquated, however, which eventually led the Egyptian government to contract European organizations to take control of the city’s garbage pickup.

The screening was held in a comfortable setting and promoted dialogue between volunteers interested in environmental quality and those on the forefront of programs created for environmental preservation; the experts, if you will.  The mix of volunteers resulted in interesting discussion.  Some were locals, others relocated here.  One east coast gentleman reflected on his mother, who recycled as her civic duty to the globe and saved hard-earned dollars, by washing plastic Ziploc ® bags and reusing them rather than tossing them in the garbage.  His wife, a Middle Eastern woman, reflected on her life growing up and the amount of recycling her family performed.  Yet another woman, this one from Vancouver, stated her amazement at the lack of recycling in Las Vegas.  Who can blame them when the Las Vegas valley has the largest landfill in the United States with nearly 50 million tons of rotting garbage? 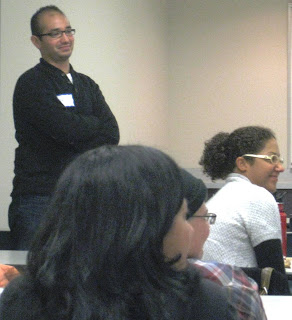 Nationwide, our recycling rate is roughly 33%.  Las Vegas is well below the national average at about 20%.  The primary reasons for not recycling are lack of convenience and know-how.  However, Republic Services, Inc. is committed to tackling these two barriers, proven through the acquisition of Evergreen Recycling and a new program to reduce waste while promoting green initiatives countywide.   New recycling bins are being deployed with images of recyclable items on them so confusion is minimized.  However, it still takes the work of citizens to attain desirable rates.

The Zabbaleen certainly understand the business of recycling and environment conservation with their remarkable 80% recycling rate.  Their theory is simple: no matter how small it is, if it can be recycled, do it.  They certainly have a positive lesson many others can learn from.

For environment related opportunities to volunteer click HERE.  To see photos from the event click HERE.
Posted by HandsOn Nevada at 11:54 AM No comments:

Did you volunteer on MLK Day and make it a day ON instead of a day OFF?  Are you looking for the next volunteer project to participate in?  Look no further than Follow the Leader.  You can create your own volunteer project by using the project templates that show you how to put the project together step by step.  This is the perfect opportunity for all volunteer Project Leaders or those looking to step up into a leadership role in our community.
On January 18 the Follow the Leader website went live and Project Playbooks are now available for download.  Completing and reporting back on a project will earn you a shot at winning the Grand Prize: an all expense paid trip for two to the Philippines for a one week "Volunteer Vacation" coordinated by HandsOn Manila, that includes airfare, fees and six night's lodging!  There are also other great monthly prizes that include all expense paid trips and Apple i-Pads.

Click here for the Follow the Leader Toolkit to help you get geared up and ready to go!  We'd love to see a volunteer from southern Nevada win one of the awesome prizes.  If you've already attended Project Leader training and want to participate in Follow the Leader email Heather with your name, contact information and what Project Playbook you're looking to use and we can work with you to partner with a local organization that can help you lead your project.  You can also browse our list of current Partner Organizations and set up your own project with an organization that interests you.

So don't wait!  Don't hesitate!  Don't procrastinate!  Be a part of the action and see if you can win one of the monthly prizes or the grand prize!

01/21/11 - Update - Just to clarify United Way of Southern Nevada's Volunteer Center is not awarding any of the prizes listed with the Follow the Leader program or the Get HandsOn Challenge.  The Volunteer Center is an affiliate of the HandsOn Network and we wanted to share information about this program for volunteers to take advantage of if they are interested in participating.  The Volunteer Center has the resources to connect Project Leaders to organizations that may be interested in working with volunteers to complete projects in the Project Playbooks however we do not have any weight in the decisions towards who will win any of the prizes.  We'd love to see a volunteer from Nevada win one of the prizes.  If you do be sure you stop by and let us know you won!
Posted by HandsOn Nevada at 4:56 PM No comments:

Sargent Shriver: The Passing of a Civic Hero

Tuesday, January 18, 2011 an extraordinary civic hero passed away.  With passion, dexterity, boldness, and idealism he set out to create institutions and movements to alleviate suffering, cultivate bonds of empathy and reciprocity across difference, and usher in a world where every individual realized their own unique potential.  In reflecting upon his life, we are reminded in the most profound ways possible, the power of an individual to change the world.

Shriver's work on the War on Poverty included the creation of Head Start, Job Corps, AmeriCorps VISTA, Neighborhood Health Centers, Legal Services to the Poor, and Foster Grandparents, among others. Alongside his beloved and extraordinary wife, Eunice, he helped create the Special Olympics and served as its Chairman, growing it to a global organization. This singular American hero, through his can-do spirit, practical idealism, abiding faith, and belief that anything is possible in the pursuit of serving others, changed the lives of millions of people all over the world.

Posted by HandsOn Nevada at 4:46 PM No comments:

HandsOn Nevada
HandsOn Nevada (formerly Volunteer Center of Southern Nevada), a program of United Way of Southern Nevada, provides a link for individuals, families, teams, and corporate groups to join together and engage in meaningful volunteer opportunities throughout Southern Nevada. We are working to promote volunteerism and get people involved in their communities. HandsOn Nevada does this in partnership with other organizations so we are working together to bring about long-lasting change in our communities. From motivating children to discover and learn, to serving hot meals to low income families, residents of Southern Nevada are responding to critical needs. HandsOn Nevada provides screened and supervised activities that serve to build capacity within nonprofit, faith-based, and public organizations. We're about empowering people to make change. Join us… be part of the change!